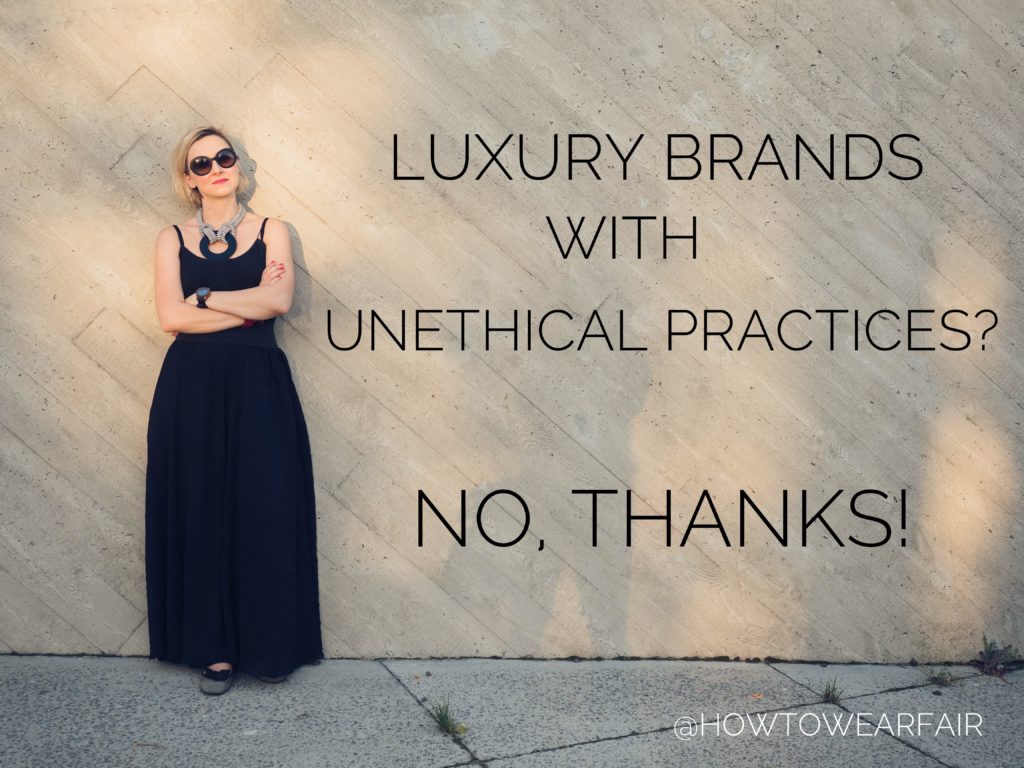 Luxury, luxurious, luxuriously,… that is…?! Although in Latin the word itself means lavishness and excess, today it is used to indicate something unique, expensive, unavailable for the masses. Luxury is nowadays clearly associated more with possessing exclusive goods rather than with living in a culture of excess. Luxurious goods distinguish a narrow social layer; for many years they have been evidently defining those who are the wealthiest in the social structure – this has been the state of affairs and it will probably continue. Once „the high fashion” used to be within the reach of a few, but the era of fast fashion has also changed the access to the goods from the so-called upper shelf. Luxurious fashion brands have entered industrial production, at the same time leaving their environmental footprint… The more often we speak about predatory exploitation of natural resources by the clothing industry, the more strongly I am troubled by the question: Is it time to redefine luxury? Shouldn’t luxury be something which is distinguished from other brands and products by something more than only the price? Shouldn’t exceptionality also consist in setting new standards of sustainable production of luxurious goods based on creation and not destruction?

We are in trouble – no question about that. August 1st was Ecological Debt Day, which means that on that day the natural resources for the entire year were used up by the humanity. Everything which we consume after August 1st we „borrow” from the next generations. Obviously, we will never give it back. A large part of those resources is exploited by the clothing industry, for example water which is used for the production of cotton. Do you realize that to produce 1kg of cotton it is necessary to use even up to 29,000 litres of water? The question here is of course the whole cycle of production, from irrigating cotton plantations, through the stages of cotton purifying, bleaching and dyeing. Growing conventional cotton also entails huge pesticide burden for the environment. Cotton plantations take up 10-25% of their world usage. You must admit it’s a lot! The clothing industry leaves its environmental footprint not only by producing cotton, but also leather or fur products, obtaining which is connected with great cruelty towards animals. Fortunately, neither the entire sector, nor the particular brands are yet so anonymous as they used to be a few years ago. It is clearly visible that companies are increasingly willing to declare their contribution to building sustainable development. One of such brands is Burberry. A company with traditions, known primarily for its already classic check and trench. On its website a lot of space is devoted to sustainability policy and responsibility towards people, local communities and the environment.

Acting responsibly and with integrity is in our DNA. Our founder, Thomas Burberry, was a man of strong philanthropic principles; he donated clothes and materials to the Red Cross and was known for welcoming those in need into his home. Today, these values serve as the foundation of the culture of our business, as we draw on the power of our heritage to positively influence our future.

Meanwhile, in mid July the world heard the information that the Burberry company had burned unsold clothes and accessories whose worth was estimated for 38 mln dollars (!!!). And it was not the first time, though, as a similar thing happened in the previous years. As the Business of Fashion portal informed, the worth of 35 mln dollars of products was burned in 2017, and the year before the worth of nearly 25 mln dollars. It goes without saying that to produce the finally burned clothes and accessories hectolitres of water and pesticides were used and a particular number of animals was killed. What is the reason why Burberry prefers to burn rather than sell its products at lower prices? In the name of higher values…, that is, in this case, primarily to protect the image of the brand. After all, not everyone can wear Burberry, can they? I must admit that is such situations I get furious because for yet another time we have a proof that many brands, even those which wish to be recognised as luxurious ones, seem to think that you can be responsible only partially. Well, you cannot! I understand that changes in organisations occur slowly. From my experience I know how much time it takes before the employees in various departments (not only of sustainable development) understand that responsibility must be systemic. But on the other hand, I can also perfectly understand the disappointment of those who observe the changes and discussions on sustainable development and at the same time observe not only what the companies declare but also what they actually do.

Dear Burberry, for those who REALLY care about the good of our Planet, burning clothes at the expense of – let’s be honest about it – also OUR resources, is, to put is mildly, rather unwise and fails to contribute positively to the image of the brand. Quite the opposite. I think that many conscious consumers who decide on the purchase having checked the sustainability policy, may simply feel deceived. I would feel so.

This is why I am coming back with the question about the notion of luxury. Don’t we happen to be coming back to its original, Latin meaning? Shouldn’t we again use it in reference to lavishness, excess which we can dispose of in whatever way we wish, disregarding the others? Perhaps luxury today is also particular and elite permission to squander resources which we can still afford to purchase thanks to the accumulated capital? Bearing in mind that in practice it means the exploitation of the common goods (the Earth’s resources) and that these resources are shrinking dramatically rapidly, it is perhaps worth considering whether to associate luxury with specificity in the scope of responsibility, pioneering approach to solutions in the spirit of sustainability, exceptionality in the care about ALL the links in the process of the production of goods. But in order for it to happen, there is work to be done by brands such as Burberry. If it does not happen, luxury will still move towards the elite, but yet short-sighted excess.